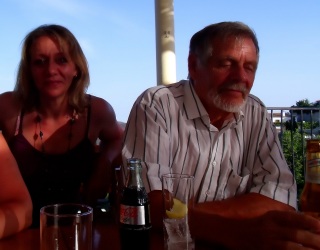 Last year I spent five days in remote bliss, staying with my dad in the Spanish mountains. He’s lived in that country on and off for the past three decades or so – happiest in craggy sunshine, away from people, where he can walk and write in peace.

After a decade or so in Amsterdam, and a taste of true population density, he moved back to Spain last year to a tiny place called Sedella (described on the web as a town, but really… no!). Life is critically slow. Two small shops open at random moments, nobody locks doors, weathered village elders gather on worn wooden chairs in the narrow alleys to bitch loudly. There’s an old church, its tower of Moorish origin, where a bell tolls when someone in the village dies. It rings a different note for each gender and tolled twice during the five days I was there. Reflective of the average age-range, I think.

Even this tiny place was too much for my dad. Since my visit he’s moved into the mountains proper and is now isolated from all life bar that of dusk crickets in the dry shrubbery, the tinkling bells of goats passing on their way up/down the cattle paths, and the occasional human visitor breaking free from the Noise of life for a taste of sanity. 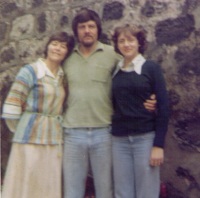 The photo above is a very rare shot of us together. He hates having his photo taken (hence the closed eyes) and I have hardly any shots of us together from my childhood (from which he was primarily absent).  Here’s one taken in 1977 (check that collar!). Yeah, I was still quite sweet, my future undetermined – all the potential of Life ahead…

The title of this blog post is a line from an email he sent prior to my visit. I’d assumed we would be doing some serious walking but the temperature was rising to dangerous levels. And I think, too, he realised what I needed was the peace, not rabid exercise. Strangely enough, given his absence from my upbringing, he’s perhaps the only person in existence who really understands me. Genetics, I guess, combined perhaps with that very absence – a lack of the sort of habitual negative judgement that lengthy close proximity can induce. It’s interesting. We’re alike in many ways… both positive and negative.

Whatever. We did walk. Easy routes. Two hours each day, in blistering heat. It was enough. The rest of the time we read, dozed, stared at the mountains. Later we’d eat; drink appalling amounts of beer and wine; talk and argue crap until dawn. It was Just The Thing.

And if I could be anywhere right now, I’d be there.

Snug in quiet mountains where the internet struggles to reach. Where a person can detach from all that shit to talk at length about ancient religious buildings, Crusades fought centuries ago, God, man, space, time… the very smallness of life… about books, theories, poetry, and all things solid. Until too tired or drunk to be coherent. Until too tied up in belligerence to ever reach agreement. And then, as the sky slowly lightens, talk some more regardless…