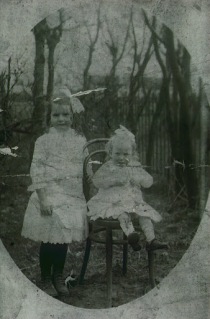 Soothing, old people should be, like apples
when one is tired of love.
Fragrant like yellowing leaves, and dim with the soft
stillness and satisfaction of autumn.

On Monday my maternal grandmother will be 96. She’s the one sitting, her older sister, who turned 101 this year, is standing.

They’re both in remarkable shape. Feisty as hell. They bicker on the phone constantly which is silly, given they’re the last two remaining family members of their generation, but still… old habits die hard and I suspect they’d already started on a lifetime of squabbles by the time this photo was taken in 1918 or thereabouts.

She and my mum argue from time to time too. In fact all the women in our family are strong-willed – we’re a bit difficult at times – and noisy when we’re all together, each clamouring to be heard above the rest. But I wouldn’t have it any other way… we’re resilient – a necessary attribute for any female and one I’ve always tried to encourage in my own two girls.

My grandma was born into one war and lived through another. She’s of a generation who never knew the frivolity of spending all that was earned – or, worse, spending more than was earned. She’s always understood the difference between luxury and necessity.

Sam, Jess and I were talking about her this weekend in advance of her birthday party. We compared childhoods; the things grandma didn’t have when growing up: family car, electric lights, television, computer, iPod, telephone – things my children just cannot imagine being without.

We talked about the things she did have – friends, games played in the street, precious toys that were loved all the more for being so few.

And also about what it must be like to get old – to get really old – and how sad it must be when most of the people you’ve loved are gone, how tired a person must get of the changing world.

The girls and I reckon, all told, she does pretty well for a woman of her years. She reads every day – crime and thrillers her favourites – and still likes a vodka or two. She shops with my parents each week, makes her own meals, keeps her little flat spotless and is always beautifully turned out – tottering around in heeled shoes when really she ought to be shuffling in flats… but, no! Vanity is the last bastion of independence and she’d sooner stay in the house than wear “ugly” shoes.

In terms of material things, she has all she wants. We can’t give her youth and years and, really, I’m not sure she’d want them back. So I said to the children, what should we give great-grandma for her birthday?

Jess thought very hard for a moment. A hug? 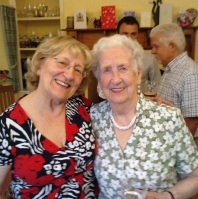 Update Monday 23rd: at her party yesterday we asked her what would be the best birthday present she could get. A new pair of legs, she said, because I absolutely refuse to use a stick. 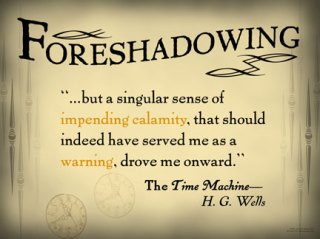 I love foreshadowing in all its guises. When done subtly it can be masterful. But I have a special fondness for it where it appears in shamelessly unsubtle form – and, in fact, ceases to even be foreshadowing but is, instead, a direct reveal of something that will happen. The Rules Police would frown on such authorly intrusion, I know.
In this extract it’s totally unsubtle. I’m thinking of having a few similar scattered here and there in the early chapters. Elsewhere I’ve gone for the more subtle approach, which I don’t have any doubts about, but I’m curious to know how others see this unsubtle form.
In this example, where it appears in the novel, only the characters of Aelita and the earl are known to the reader – the others are being mentioned for the first time. This extract morphs into a scene where George tries to dominate a meeting of the town committee – the reader therefore meets him knowing in advance he’s going to kill the barmaid at some later point… but not knowing why.
Is it too much? Does it irritate or intrigue?? Any comments welcome!
In The Anchor, Lizzy uncorks a bottle of red and winks, pointing towards its twin, a third-full and already open on the counter.
“That’s probably off,” she says to Aelita. “I’ll give it Boswell, he won’t mind.”
The indiscriminate drinker, Boswell, is a town character. Nobody knows his real name or, indeed, whether ‘Boswell’ might just be it. He claims to have a home but spends few hours in it – certainly not long enough to bathe, change or pass any time with the wife he also says exists. Each day is, instead, a rhythmic shuffle through town, stopping to chat where conversation can be found, gravitating ultimately to The Happy Haddock where he eats dinner alone. At nine o’clock he’s at The Anchor. Locals keep time by him. Once in the pub, he buys himself one large glass of house wine and chances the rest of the evening’s drinking to luck.
Aelita knows Lizzy with the usual illusion of familiarity that comes of these things. She couldn’t give a reference beyond cheerful, hard-working and talkative, but doubts Lizzy will ever need one. The barmaid is as much a part of the pub as the flotsam hanging from its walls – the select pieces of broken boat, the stretches of netting, the framed photographs of those who once laboured even longer hours, out there, on the dark unforgiving sea. Everyone and no-one knows Lizzy, just as they know these other familiar objects yet cannot say where they came from or where they’ve been.
When George Delaney furiously beats this popular girl to death, her last thought will be of Bertie Boyde – Lord Belafry, thirteenth earl – her secret lover for some eight years. The final cloudy image in her mind will be his kind face, his smile, his affection, his sweetness. She is very fond of him.
“George is on top form,” she says now, just a barmaid with no past.
“Who’s he with?”
“The other one.”
The rear snug is used for committee meetings. George’s voice reaches Aelita a fraction before the contents of his pipe – tobacco imported specially, and described by him with its plum and wood-smoked undertones as though it were fine wine. The room is small and not suited to heavy fragrance. This pungent fog, combined as it is with his mistress’s perfume, sets the real agenda. George only ever brings Lucinda when on the attack.
The dying hawthorn branches crackle and spit with the fury of fireworks, their leaping glow an impossible promise of potential – an intensity, a vigour which fades to nothing in moments. John forks the pile, pushing its life to an ever-shrinking centre point. He is pleased to have a physical task with which to occupy himself, gratified by the heat, the wayward sparks pricking his skin, the coiling smoke which stings his throat and waters his eyes. Something needed to trigger a release.
His wife has told him, only hours earlier and almost in apologetic passing, they are expecting another child – a seventh. There is no room for more, not in the house, not in his heart, and yet what can a man do other than wrap an arm around her briefly, we’ll manage. It is a mistake. An error. A mishap that must now be transformed into a hope. It is the remnants of a similarly conceived fire – a clumsy attempt to create something stronger, something which rises more delicately to intensity, burns off its early passion and settles into a lasting flame. Something which slowly, only slowly, becomes embers – and, still, that solid warmth – before it finally turns to ash.
But such a fire needs a stronger base. A bed of dry kindling, hefty well-seasoned logs and enough air to fan but not disperse its flame. Such a fire needs the sort of forward-looking attention to preparation and selection and execution which only comes from experience. It must be planned well, before it starts. Enthusiasm alone is not enough. Yet it was all they’d had some two decades before. That and a desire to escape the ashes of their own parents’ failings. The urge to fly. He’d always felt it and had thought with her, his wife, it was the same – or at the very least that she would cling on tight as he flexed his wings and took them both elsewhere. That they would soar. Together.
He kicks the final twigs into scattered embers, fragments of passion which now flicker weakly and which will, before he’s even washed the grime from his skin, ebb into the darkness and be gone. 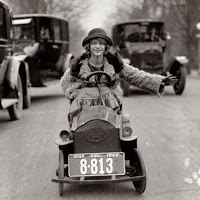 For almost thirty years I’ve had my own car. This week my beloved Ugly Fiat will go, and I am not getting a replacement.

There’s a quiet but growing angst in my breast. I’m not a creature that fares well in captivity – I do need to believe all horizons are potentially mine. But this was always the plan with our move to town – no need to fund two vehicles when one of them spends 90% of its time resting in the garage – and so I must adapt.

To be fair I shan’t even notice for the majority of day to day life as I’ve barely used mine since moving here. But I’ll have to fill in all manner of Domestic Dockets to get a calendar slot for the new one when I do need it as it won’t be available to me as a matter of course during the working day.

Musing over this loss of independence got me thinking about all the cars I’ve had over the years. From old bangers to sexy sports cars to Those Suitable For Transporting Children. Twenty cars in twenty nine years!  And all different!

And this led to thinking how many types I’ve actually driven in those twenty nine years, because there are also those I used to regularly borrow from bosses and boyfriends, which probably adds another twenty to the list – at least – and a much more glamorous twenty too: Rolls Royce, Porsche, Ferrari, Mercedes, BMW, stinking big Daimler Jaguar (nicest, smoothest, easiest drive, btw), a vintage e-type Jag (scariest!), a bus and a JCB digger…  okay, so the last two weren’t terribly glamorous but they were a hell of a lot of fun to drive.

So… yes.. I like cars and cannot see me without one forever. Indeed, as I begin my pedestrian quest it is with one eye on the future acquisition of a little beauty I’ve always wanted.
Gorgeous, isn’t it? And it comes in pale blue too…