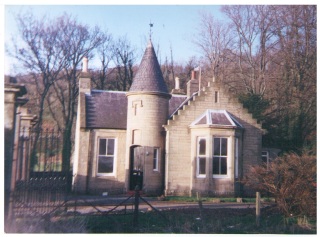 It was a time of great unhappiness. Dark clouds occupied more of the sky’s expanse than could be dismissed as a passing mood. The sun seldom broke through long enough to be trusted and the wind’s relentless effort failed to blow away the gloom. I took comfort in long beach walks, the company of angry waves suiting my disposition far more than that of any human.

I lived in the grounds of a castle. In the exit lodge to be precise. A small Victorian addition, its humbleness moderately deflected by the turreted entrance and high-windowed façade. Bats rightly inhabited the turret, their young emerging and learning to fly in summer’s dusk, several falling foul of dark windows as they returned, aiming for the eaves but failing in their novice attempts. Inside was cramped: three original rooms with no corridor, and an ugly rectangle tagged on sometime in the sixties to house a kitchen and bathroom. I worked from a small study which doubled as a guest room, though there were rarely guests. It overlooked the rear where pheasants came to hide from the shoot, to breed in the tangle of unkempt rhododendron bushes. The garden was wild. I liked it that way.

In summer, coachloads of tourists would queue at closing time outside the lodge, waiting to exit the gates onto a perilous bend of the coastal road. They would peer in through the windows as though my home was part of the attraction, as if to get their money’s worth. An American couple on foot once stuck their heads into the open sash and proclaimed the living room cute. The castle was a part-time whore by modern necessity; open for public tours, available to hire for weddings and conferences, its laundry and stables converted into shop and café, grounds used for fêtes, markets and sporting events, its remaining forests harvested and prepared for sale in the on-site sawmill. The family lived in two or three private rooms with a scattering of inherited treasures and the stories of 800 years.

I did some freelance work for the Estate Manager – a bad-tempered man who wore tweed as an imperative and whose manner, as is perhaps often the case, far outstretched that of his employer in its pomposity. The Earl himself was charming, fascinating and never happier than when wandering his estate, mingling with staff and tenants. He saw us as family. We used first names. Once the gates closed in the evening, the castle and grounds were quiet, they were ours. There was a necessary camaraderie. It’s not easy watching strangers nose through your life.

His children were away at school much of the time. His wife was rarely there, a brief flash of silver Mercedes bumping too fast up the drive once or twice a month. She never stayed. Rumour said she’d run off with a female lover and spent most of her time in the city. In a small community this was entertainment. The Earl not only had to contend with a crumbling home invaded by ignorant cultural list-tickers, but also an unwanted public sympathy and mocking whispers behind his back. The dignity of generations and strain of preserving for the future drove and sustained him, I think. He was busy. He was cheerful.

John arrived on the estate the second spring I was there. He was hired as falconer, to perform for the public during open season and undertake labouring jobs in the winter months. He moved, with his unfeasibly large family, into the woodman’s cottage, tucked privately away in the forest out of sight of the visiting public. But though others envied him the location, with five stepchildren of varying ages and one young son there was little room within its walls to move, breathe or be heard and he spent most of his time outside tending to the birds or walking his dog.

We met – fortuitously at first, later by design – on the track up through the forest early evening, or along the pebbled beach in the morning, our dogs becoming friends and forcing a conversation which grew in breadth and depth until we followed suit.

Theoretically I did not live alone either. Yet as we moved beyond those early reluctant conversations – the dog talk, the weather, the tides – came a sense of needing to harness urgency, to temper all that clearly could be said, to adopt a false pace. We were equally starved and this unacknowledged truth enveloped every word.

“I come down here sometimes at night,” he said, kicking pebbles with a dusty working boot as we walked along the beach. “Sit in the dark over there on the wall, listen to the waves. Try to guess where the waterline is, whether it’s coming or going. You can tell, it sounds different. Retreating tides are best.”

He was strong and adaptable. He fixed things, made things, his hands scarred by capability. He worked hard in all weathers, whistling unrecognisable tunes and never once did I hear him complain about cold, wet or heat. I liked arriving unseen when he was busy with the birds, or erecting yet another section of aviary, or digging up belligerent weeds to create a patch of ground for low perches. I’d watch until he sensed I was there, or his wife came out of the house with a cup of tea and called a cheery greeting, breaking the silent contemplation.

She became less enamoured of my visits over time. Stopped sitting outside with us on summer evenings, drinking wine or beer, smoking and talking. She found the conversation too speculative, thought we talked too much, that any talking was too much. She went inside to watch television with the kids and eventually I stopped calling round. Eventually I moved away.

I’m forever drawn to the poets. Those who present a front of strength but who harbour inside a melancholy will; a wistful philosophy; an ability to dream. These moments are the paths seen but not taken. They are the unexplored chances, the ‘what-ifs’ upon which our present is judged, our future formed. These moments become the basis of most regret.

5 Replies to “The Falconer”