I met an old and dear friend for dinner this week, someone who is – outside of family – my longest-known-and-still-in-contact-with person. We’ve known each other 40 years, but have lived quite distinct lives for the last 35 – catching up sometimes rarely, but in that glorious “it’s as though the intervening time hasn’t happened” way.

And yet it has. Sitting, post-prandial, by the log fire in a wonderful rural inn, we spoke about various Stuff that’s happened over recent years, and there was a sudden lull. A joint pondering. He said, “man, but there’s been so much…”

So much Life, is what he meant. Between ‘us then’ and ‘us now’, we have each lived full grown-up lives and despite the natural familiarity are, in fact, largely strangers.

Which got me thinking – good, positive pondering, like a visit from the Muse – about this friendship, and others, spanning years and yet to all intents fixed on a small space of actuality: a tiny fraction of Time Known, where there was a tight connection, with the intervening years enhanced by that strong sense of recognition – a tie, a bond, a lasting connection – which is actually a memory, a perception, and no longer a reality.

My dinner companion was a hugely important part of my life 35 years ago, and the essence of that remains. I’ve spotted him, occasionally, in other men, in other decades. The glimpse always draws me. It’s that memory of something… perhaps it’s unfinished business from a previous life. Perhaps it’s a quest on behalf of an alternative self in a parallel world. Perhaps it’s just a hunger.

Ah, but it was a gentle and welcome Muse. It resulted in a poem: 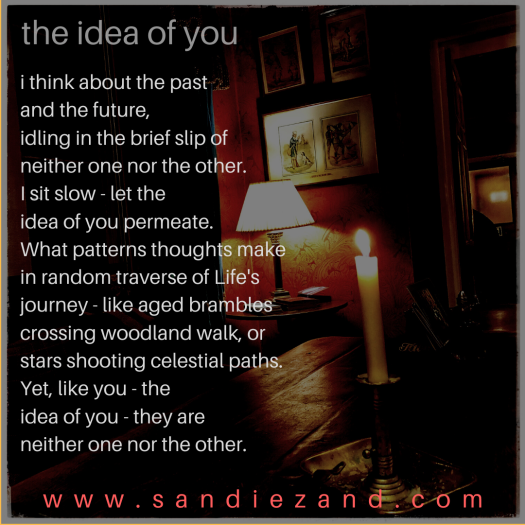 Half a million words

lie in my basement

tumbled in wait for

when I will devour them

I will savour them

Enough for a book

or three, or five

Took that time to write

Take that time to read

I will eat my words

one final time and 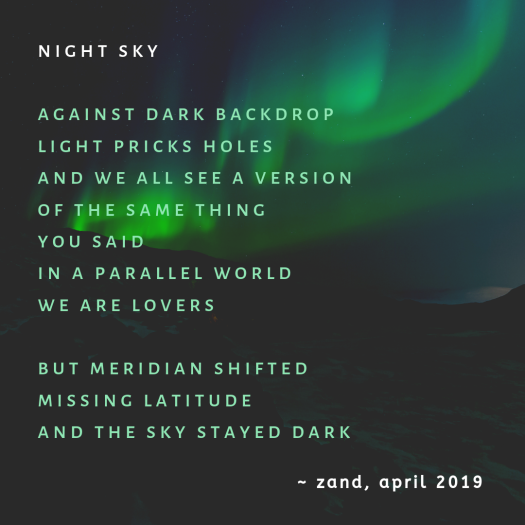 Whilst the world lunged forth into 2019, Fate’s divination zapped me back to the seventies and I haven’t yet managed to find my way out. Funny, but I’m happy lingering here, somewhere in the mid-late 70s, when summers were summery and life was simpler.

I saw a news article a day or so before the rest of you left 2018 – a mere glimpse as I scrolled, the corner of one eye just capturing the name ‘Karen Carpenter’ – and from that momentary input came an ear worm firmly planted:

Twenty four hours of that and I had to listen to the song in the hope it’d go away.

It didn’t go away. It intensified. It was the unexpected portal to a past from which I’ve yet to emerge… primarily because I’m loving it here.

What a beautiful voice she had. My parents had the album and I’d listen to it – I’d sing along – with others that remain fixed in my mind from that time: the Bee Gees, Simon & Garfunkle, Barbara Streisand… many songs from whom have survived the test of time and are still enjoyable now. I’d lie on the living room floor when my parents were out, the record crackling in circles on the player, getting up periodically to turn it over (yeah, remember that?!), carefully place the stylus, and play the other side.

Delayed gratification of a type we no longer recognise.

With the ear worm refusing to budge, and the memories of a simpler time beguiling and not something I wanted to cast out, I downloaded the Carpenters’ greatest hits album on Apple music and listened to the lot. Songs like Goodbye to Love and Solitaire still make my heart ache, but I’m not entirely sure they’ve stood the test of time – I think my kids would find them very much of a bygone epoch. Though the sentiments are entirely current.

No surprise, I guess, as there are a limited number of plots for human experience… some say 6, some say 36 – either way, we’ve been singing the same songs of love won and love lost since we first sat round a cave pit fire, banged a few rocks, grunted in unison, and found we had rhythm. Prior to that how did we feel? Who knows. Perhaps we were less inclined to acknowledge hurts. Perhaps we just went out and bludgeoned a few edible critters. Got over ourselves.

Now… well, we reflect. We feel pain. We actually enjoy sadness to a point… and then it gets too much. There’s a fine line between melancholy and pain. Sometimes I wish I could just go out and bludgeon a few edible critters. Superstar, up next:

So, Yesterday Once More… beautiful and I reckon it’s stood the test of time. Goodbye to Love, not so much alas and yet that guitar riff towards the end is blissfully relevant. Solitaire… well… I find it hauntingly beautiful, and apt for our times, but I guess it’s now dated even if the context is relevant – moreso in our world of social media.

The song which has least stood the test of time is the one referred to in the title of this post: Please Mr Postman… which probably made me the most nostalgic. Do you remember getting letters???? It was wonderful! Letters, postcards – more glorious delayed gratification – and long-winded phone calls, tied to a fixed point, sitting on the carpet somewhere for hours because phones had wires that would only stretch so far, and that was that, we knew nothing else.

I’m not ready to join you all in 2019 just yet. I need to just listen a bit longer… but Happy New Year to those of you who’ve arrived. I’ll see you there later.

A sweep of grey concrete opens before you

Cresting, dipping, turning in to the

hues melding into a slow line of duty,

the flow of morning conformity.

Commute, comply, coexist, why not?

You have your foot on the accelerator

as the distant light turns from green

closer than you think?

– you have your foot on the accelerator

as the nearing light turns from green

to amber, you are the pilot on automatic

who for a second’s moment sees impulse

as choice whilst choice becomes impulse

though who knows the Truth of it anyway?

Decisions are made, one’s own life

and the foot pauses or presses,

movement halts or flies – almost on a whim

As if nothing drove it. As though it were random.

You continue, Commuter – a momentary

annoyance for those paused unwittingly

or a heartbeat’s fear for those in your way.

for the soul to de-commute for a bit.

Be a Good Citizen of the Road

when all’s said and done it’s what we have left to work with.

For now, you are the god of the road.

Decisions and choices are made by those who lead.

Conformity may be your creed but Impulse is your devil,

Choice remains your elusive Holy Ghost, and the

poet racks up another few lines no matter what.

which now rests a while, it doesn’t care either way.

The foot lifts from the accelerator.

I was in Oxford yesterday and happened upon a sale at The Ruskin School of Art. I had to drag my eldest in – she really wasn’t remotely intrigued – and once there, we proceeded to browse intently this offering of energetic, creative youth.

I bought the artwork shown here. It resonated, probably way more than it should have done given that I’m ancient and the artist a mere babe… 😉

The artist is: http://www.jessicaheywood.com and I liked a lot of her stuff at the exhibition. This one in particular. She also writes painful but often beautiful and raw poetry.

On the way down to Oxford – a 2 hour drive – daughter and I had waxed lyrical on feminism, politics, humanity, life… the usual fare, we have a healthy regular line in conversation… and much of what we saw adorning the walls of the Ruskin School seemed – to me – to echo our conversation, and indeed many other conversations we’ve had.

Alas, no. My daughter was quietly horrified at what she saw as (and I paraphrase here) “teenaged doodles, not art”. When I suggested we’d finished browsing and should be heading back, her relief came in a hissed “yes, let’s go!”

For me, the exhibition/sale showed more of the same youthful energy and passionate belief I see, feel and hear each time we check out another university. The energy in these places is almost palpable, certainly to one as old (!) and long-toothed as I. So what we saw at Ruskin wasn’t ‘art’ because of its skill in recognised & approved techniques, or even in originality, or indeed execution (a lot of it was sketchbook stuff), but it was art to me because of its passion and intent. For my daughter, though, it was an awful and uncontrolled outpouring of her generation’s angst – everything bad she’s ever seen on Tumblr or college toilet walls, stuff you might think but certainly don’t ‘put out there’.

Interesting. She and I may appear to agree largely on political and sociological issues and ideals, but clearly we’re approaching our view of Life from two very different angles. I’ve been mesmerised by our trips to universities – simultaneously admiring, adoring and thrilling to all these marvellous young folk embarking on their adult lives… whilst a tiny (but significant!) part of me envies them their vast choice… they have *everything* ahead! Whereas my daughter… well, this is her generation – she’s grown with them in life and all over social media and she’s just not as impressed as I am with their stance(s). 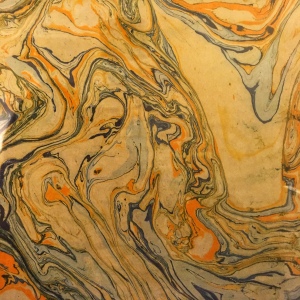 I bought another ‘artwork’ recently… a piece of hand-made paper I’ve framed and put on my bedroom wall. I love it. That’s why I call it art.

But what really is art? The experience with my daughter shows me that it can – and cannot – be anything, depending on who’s assessing.

She and I listened to a lot of (my) music on the drive to and from Oxford – and I’m always warmed when she asks “who’s this?” and then Googles it… but there’s a lot she must be quietly dismissing and, again, what resonates with me as a passionate or otherwise appealing piece, can – and does – leave her cold.

We did, once more, find agreement on certain musical pieces, though – and this one in particular: